I now have an official Reader’s Card at the British Library. I’m researching what little is known about a few people around the theater scene in late 1603 / early 1604. 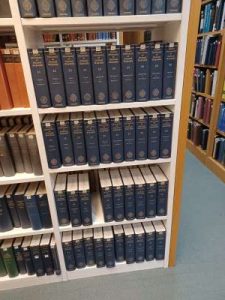 Truth is, anyone can get a Reader’s Card, which allows you to request all sorts of books and documents that mostly aren’t available in the wild, or even (so far) on the internet. These are the sixty or so volumes of Oxford Dictionary of National Biography, which was in the open Reader’s Room because it’s “rare” only in that almost no one has a copy, though there were thousands printed at one time.

It has been updated and revised for many decades, so it was fun to trace how much more has been learned (or speculated?) about a few obscure figures in my lifetime.

A “dictionary” of biography? This book has the names – in one spelling or another – in alphabetical order. Apparently the word was used in this variant as far back as 1576. So I learned something else in London today.

I also learned everyone still smokes here, which made the idea of having a pint with my wife much less attractive….